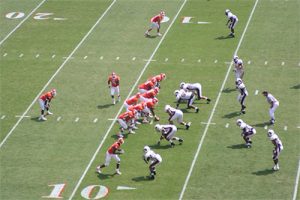 Peyton Manning has built teams that are so strong offensively that many times their best defense is the offense they built. Other teams define a game plan that hopefully will keep his offense off the field. Because Peyton Manning’s offense is so strong it has altered how teams play against them. Certainly the opposing team would like to have their defense stop Peyton, and they attempt to. But the opposing team is so off balance that they also build an offensive plan that hopefully would keep Peyton off of the field of play.

The best defense is an offense.

In our organizations we need to be aware of those that deflect accountability by utilizing the approach that the best defense is an offense. Quickly they will find a way to put your managers on the defensive instead of addressing the situation and accountability at hand.

I remember joining a company and each week we had a leadership meeting on measuring sales results. During that meeting we had a manager who was a master at having an offensive game plan ready that would deflect accountability for his results. I was amazed at how good he was with his deflection as he was ready with his game plan of deflection and would alter the conversation.

The best leaders can be led astray and allow themselves to lose focus on the meeting at hand. A good manipulator has a game plan to do exactly that. That person that wants to deflect accountability has a list of other items that bring concern and leads the leader in a different direction and changes the conversation.

The person in our business had a list of items that went wrong in other departments the prior week and how it affected his focus, and he attempted to demonstrate the harm those items had caused in his business. He quickly altered the conversation and other managers at his level also started to bring up similar or additional issues. His game plan was in full execution and it changed him being held accountable that week.

I am not saying we should not pay attention to problems that might have occurred. But what I am addressing is the need for leaders to recognize such tactics and have a better game plan of their own. In our situation we took back control of the meeting, stated the true purpose of the meeting that was being held, and spoke to the agenda; accountability.

We demonstrated we had a game plan of our own.

When that manager came out with his offense our defense was ready and stopped his game plan. Quickly that manager was held accountable and that weekly accountability meeting had purpose.

The best defense is an offense? Be ready with your game plan.